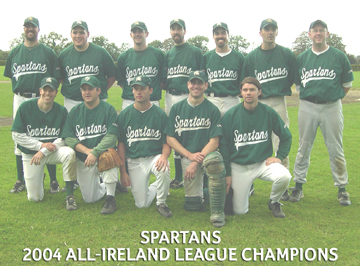 Spartans won the Playoff Championships beating the Black Sox 12-7 in the Single-Game Final after finishing the Regular Season as runners-up on a 14-2 Win-Loss record (plus two forfeits) and then sweeping the Greystones Marinners (12-6) in a best-of-3 Semi-Final. The Black Sox, also 12-6 had shocked the favourites, Hurricanes 2-0 in their three game Semi-Final, after the Gurricanes had won the League Pennant with a 16-2 record.

The 2004 Irish Baseball League season was the 8th Season of the Adult Irish Baseball League. It featured 10 teams, an increase for the third year running – again a record number of teams. All teams returned from 2003, and new additions were the Trojans and Belfast Wolves.