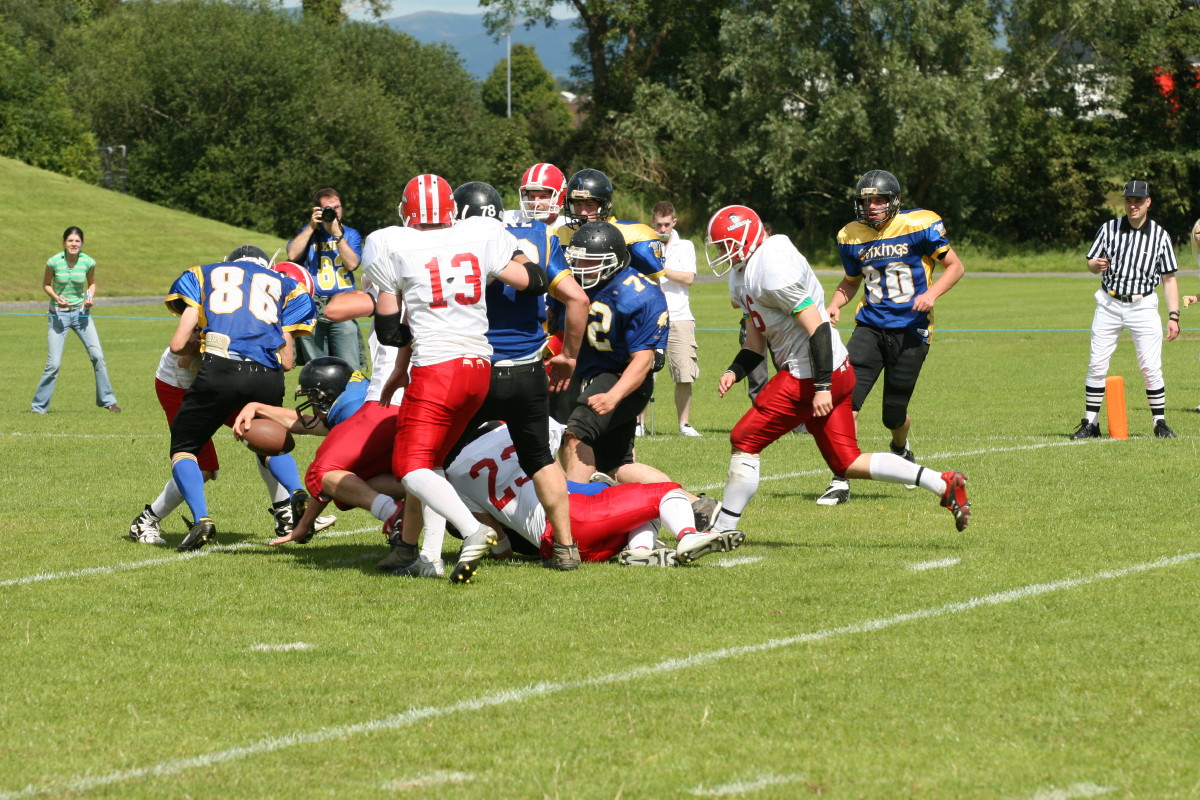 Seamus Hogan, who scored two touchdowns, won the Most Valuable Player Award in the Irish American Football League Shamrock Bowl XXI in 2007, as the University of Limerick Vikings beat the Cork Admirals 22-14 in a close Munster Derby.

Cork had a great start with kick returner David Barry returned the opening kickoff well into Limerick territory. They were stopped short of the goal-line, however, as were the Vikings on the next drive. On their next possession the Cork Admirals got into good field position following a 40 yard draw play by full back Alain Pezeron, leaving them on first and goal on the 3 yard line, which Keith O’Callaghan capitalized on with a 3-yard rushing touchdown for the first score of the game. Pezeron converted for two points.

The vikings got back into the game immediately, with Quarterback Chris Bassitt driving them downfield, helped by Running Backs Andrew Gordan and Seamus Hogan. Hogan got the equalizing touchdown, with a 5-yard run up the middle, converted for two points by Bassitt. The second quarter was scoreless as both defenses held the opposing offense, with good defensive plays by Vikings defenders Eoin O’Sullivan, Declan O’Donnell, Damien Laffan and Alan O’Carroll. The Admirals defensive line of Marcus Gates, Ross McCullough and Barry Rea forced a number of tackles for losses. The Vikings got the first turnover of the day with less than 5 minutes to go to halftime, when their defensive back intercepted the ball, however, they missed the resulting field goal, leaving the score 8-8 at half-time.

The first play from scrimmage of the second half yielded the second turnover of the day, as Admirals linebacker Martin Mulvey recovered a Vikings fumble to leave them in good field position on the Vikings 20-yard line. Shortly afterwards, the Admirals went 14-8 up as Quarterback David Lomansey connected with Wide Receiver Dominic MacHale for a 30-yard touchdown pass. Limerick then drove deep into Admirals territory, but a fierce goalmouth stand for the Cork side on their own 5-yard line prevented the Vikings from scoring. The Vikings defense, however, ensured their offense got another chance before the quarter was out, as they forced the Admirals to punt, giving the UL offense the ball at midfield. Through runs by Bassitt and Gordon they got to the 10-yard line, where Seamus Hogan scored his second running touchdown, on a draw play up the middle, pushing the ball over the goal-line as the Admirals defenders attempted to tackle him. The Single Point Kick conversion put the Vikings 15-14 up at the end of the third quarter.

Again the Vikings defense forced the Admirals to punt early in the fourth quarter, and in the ensuing drive, the Vikings went to the air with a long pass from Quarterback Bassitt to Wide Receiver Marc Ashworth, setting up MVP Seamus Hogan for his third touchdown of the day, as a he scored on a 5-yard sweep to the right. again the conversion kick was good to put the Vikings 22-14 up. The game was not over yet, however, and the Admirals drove to the Vikings two-yard line on the next drive. In the best defensive performance of the day, the Vikings held, the Admirals on all four downs, and the Vikings punted on their next possession having failed to run out the clock. The punt pinned the Cork side deep in their own territory, and while they picked up a couple of first downs, were stopped on fourth down with less than 30 seconds left. The Vikings could then celebrate their first ever Shamrock Bowl win. [Ref: 4]

The Central Division had a clear winner in the Dublin Rebels, who finished on 6-2, well ahead of the Dublin Dragons on 2-6 and the DCU Saints.

The South Division was also close, with UL Vikings finishing with best regular-season record in the league, 7-1, just ahead of Cork Admirals on 6-2. Tallaght Outlaws were placed in this Division, which meant long trips down to Munster for them, and in their inaugural season, they were no match for the more established teams, going 0-8.

The Wild-Card Playoff saw Cork Admirals win 30-0 against the Trojans, and then in the Semi_finals, they shocked the Dublin Rebels 8-6. The other Semi-Final saw UL Vikings trounce Belfast Bulls 44-2 to set up the first All-Munster Final, which the Vikings won 22-14, their first ever Shamrock Bowl victory.