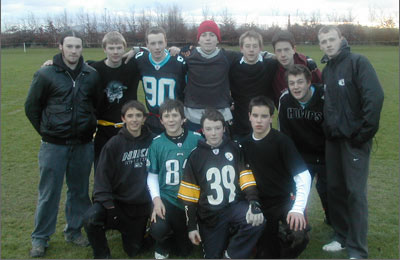 In the first tournament of the Irish Flag Fotball Association Junior League on 20 November 2005 in a Thanksgiving Event held at ALSAA (aer Lingus Sports and Athletic Association at Dublin Airport), Belfast Bulls came out on top with two wins from two. Broncos and the Dublin Rebels each also won both their games. Cork Admirals, Craigavon Silver Titans and Cork Predators all won one game each while Craigavon Blue Titans, Carrickfergus Knights and Dublin Rebel Rams lost both their games.

Six teams entered the second tournament on 28 January 2020, with North Dublin Marrshalls a new entry. Dublin Rebels narrowly lost their first two games before winning their last three to put them on 5-2 for the year.

Flag Football is a non-contact version of American Football whereby teams (usually of 5) play on a smaller field (50 yards with two 10 yard endzones), using Flags tied around their waist which must be pulled of by the tackler. The aim as in American Football is to pass or run the ball into the opposition endzone, within a specified number of downs (attempts) – teams have four downs in which to reach the Halfway line or two lines close to either endzone, or the ball is turned over to the opposition. On completing either a touchdown (reaching the endzone) or one of the first down markers (ie the Halfway line or one of the other two lines) the down count starts at one again. A Touchdown is worth 6 points, and a conversion (which must be passed into the endzone) is worth one or two points depending on whether the scoring team opts to start from the 5 yard line or 20 yard line. There is no kicking, although in Irish Flag Football in the 1990s there was kicking and seven player teams. Teams are mixed (coed).

Thanks to Peter Mullen, Drimnagh Cycos