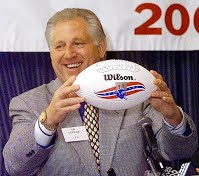 The International Football Federation was a proposed AAA rival league to the National Football League that intended to begin play in March 2000. It had no formal ownership, and no TV contract, and lasted just one press conference.

15 Cities were reported to be in the deal, with Mexico City a possibility also, but the formation of the XFL, and its multi-million dollar TV contract with NBC put and end to the league.

According to Marty York of the Toronto Globe, Toronto Turbos, Boston Revolution and Connecticut Patriots were the rumoured names of three of the teams, and the league had intended to have a $4 Million salary cap, with most players paid no more than $85,000 per year.

It had four planned cities: Seattle, Philadelphia, New Orleans and Washington DC, but the emergence of another rival league, the International Football Federation, saw the two leagues consider merging, although it was a third league, the XFL, with its multi-million dollar NBC TV contract which put an end to both leagues.

Thanks to Ed Murphy