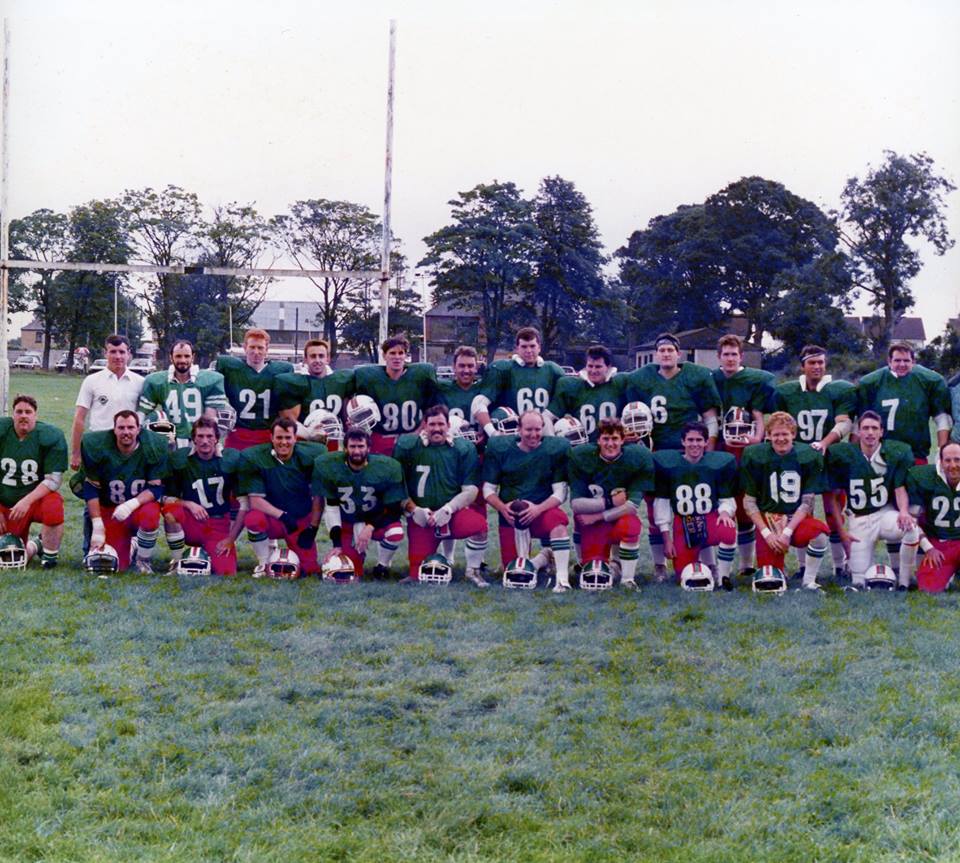 The first Irish American Football team was the Dublin Celts, formed in the Phoenix Park in 1984. With no opposition in Ireland to play against they played a couple of friendly matches against English opposition in 1985. at the same time teams were forming in Northern Ireland, although they were not fully kitted. The first match in Ireland between two Irish Teams took place in Omagh Co. Tyrone in 1985 with the Tyrone Tornadoes and Coleraine Chieftains the teams involved.

By 1986 there were enough teams to start an informal league – Belfast Blitzers won both the Irish American Football Association League and Cup, and also won the Northern Ireland American Football Association Championship, which included all the IAFA matches played between Northern Irish teams (i.e. it was a League on paper only). Other teams were the Carrickfergus Cougars, Coleraine Chieftains, Belfast Spartans and Craigavon Cowboys. Ballymena Wolfhounds played Junior only.

There was a Shamrock Bowl at the end of the season which was by invite, but the Blitzers declined to take part as they considered themselves already Champions having won both League and Cup. The Craigavon Cowboys beat the Dublin Celts 6-2 to take the first Shamrock Bowl.

By 1987 there were 11 teams playing full-contact kitted American football, with the addition of the Belfast Giants, East Side Jets, Jordanstown Jaguars, Bangor Buccaneers and Dublin Tornadoes, meaning the creation of two Conferences: Tara and Mourne, named after two mountain ranges associated with ancient Irish kings. Dublin Celts gained revenge in the Bowl, beating the Cowboys 43-25.

Two of the sides in the League, Jordanstown and East Side had disbanded by the halfway stage of the 1987 season, and in 1988, the Bangor Buccaneers moved to Newtownards, becoming the North Down Raiders, but never took part in the League that year. Belfast Giants also sat out the season. The two Conferences were renamed the National and Irish Conferences, and in Shamrock Bowl III, Dublin Celts defeated Belfast Blitzers 34-6.

By 1990, the League lost another team as the Blitzers disbanded after losing the Shamrock Bowl, but the Giants returned, now playing as the NI giants, and based in Lisburn. The League elected to play in the Combined Gridiron League, which was intended to unite the various competing leagues in Ireland, Scotland, Wales, and the English Regional Leagues. As well as playing in the CGL playoffs, the winners of the two Irish Conference played each other for the Shamrock Bowl, and the title of Irish Champions. Dublin Celts beat new team A26 Bulldogs, from Antrim 7-6.

Prepared and maintained by Enda Mulcahy for the