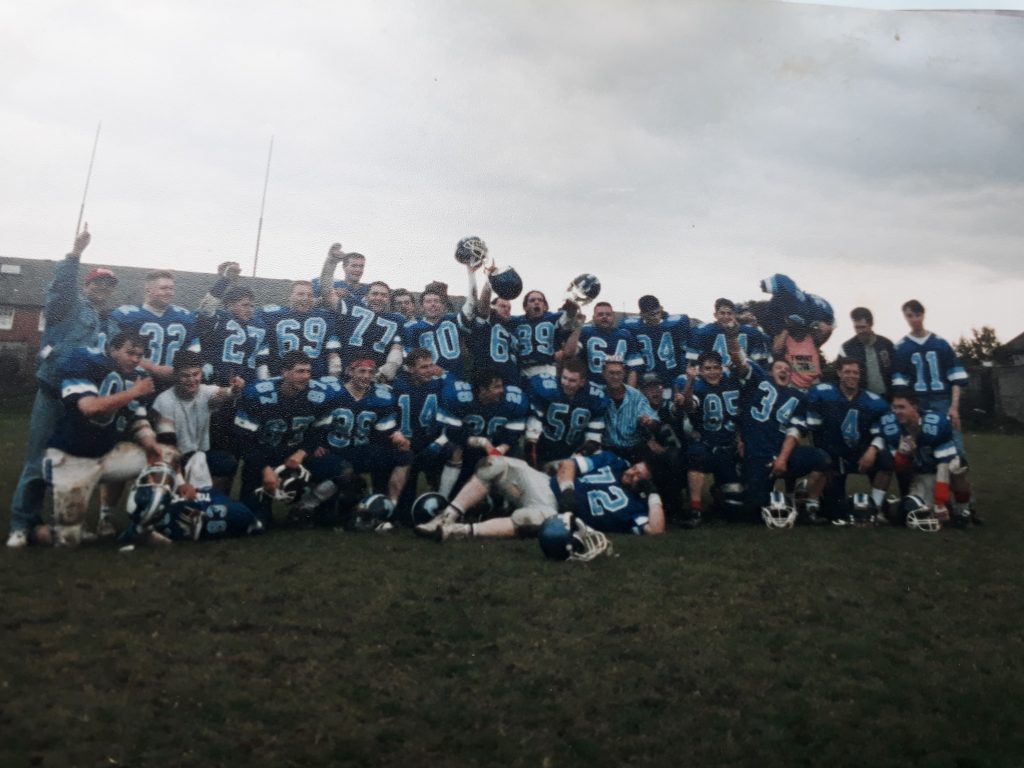 In 1991 the Irish League was reunited, as the Dublin Celts rejoined after a season playing in the English second division, and the Dublin tornadoes joined them and the Irish League of American Football teams in an All-Ireland American Football League. The Carrickfergus Cougars and Coleraine Chieftains had merged as one Antrim team, the Newtownabbey Warriors. Craigavon Cowboys didn’t play that season. Dublin Celts, as expected, ran away with the League title, and then defeated Antrim Bulldogs 66-6 in Shamrock Bowl VI.

In 1992 there was again two conferences, Tara and Mourne, named after mountain ranges associated with Irish Kings, and the addition of the Lee Valley Steelers from Cork, and Drogheda Vikings, a split from the Celts, brought the league up to 7 teams again. The Cowboys also returned, but the Warriors disbanded. On opening day the A26 Bulldogs became the first Irish team to beat the Celts since 1988, and the Celts proceeded to lose their first three matches before winning their last three to make the playoffs. Conference Champions were the Dublin Tornadoes and Craigavon Cowboys, who defeated Antrim Bulldogs 14-6 to take their second or third Shamrock Bowl (there is sill dispute over who won in 1990).

The League again became one division after the Drogheda Vikings disbanded and reformed as the Ardee Falcons in a 8-v-8 Mini-League. Dublin Tornadoes and Dublin Celts met in the first ever all-Dublin Shamrock Bowl, after knocking out the Belfast Spartans and Craigavon Cowboys in the Playoffs. The Tornadoes won their first of three Shamrock Bowls, defeating the Celts in what would be their last ever game, 19-2.

1994 saw big changes to the league. New teams were the Carrickfergus Knights, a follow on from the Prospect Pumas Junior team, and the Lurgan Area Raiders (a reformed Craigavon Cowboys), but the league lost the Celts, Bulldogs and Lee Valley Steelers. The Bulldogs had lost three Bowls in four years, and the Celts had also disbanded after lack of success. The league was now just four teams, and the Dublin Tornadoes again won the Shamrock Bowl, beating the Carrickfergus Knights 18-13.

In 1995 a new team, Dublin Lightning, formed partially from old Dublin Celts and Drogheda Vikings players entered the league, but the league remained at four teams as the Belfast Spartans sat out the season. All for teams made the playoffs, and the Tornadoes won their third in a row, again defeating the Knights, 34-12.

The 1996 season saw the return of the Belfast Spartans, and the Lurgan Area Raiders, moved to Portadown, becoming the Pumas. The Dublin Lightning won their only Shamrock Bowl, defeating the Dublin Tornadoes 26-8 in Shamrock Bowl XI, in what was the last game the Tornadoes played, as another team disbanded after losing the Shamrock Bowl, with a lot of players retiring.

A new organisation, Image Management and Promotions, took over the running of the league in 1997, renaming it the Irish Senior League, like its British counterpart, and the Dublin Bulls, a new team based in Gateway Computers, joined the league, however, the Spartans had left for good, and with the loss of the Tornadoes, this left the League with four teams again. Carrickfergus Knights won the first of their Shamrock Bowls, 21-0 against the Bulls.

The new organisation was unpopular with a number of players and teams, and the Lightning dropped out, and the Greystones Rebels (who had formed in 1997 but didn’t play) also went alone, setting the scene for a dispute between the IAFA and Image Management and Promotions, which lasted until 2001.

If you think Eirball is worth reading then please make a Donation of €5.00 or what you think it is worth to help keep the Archive up and running and on the web and to help fund future research