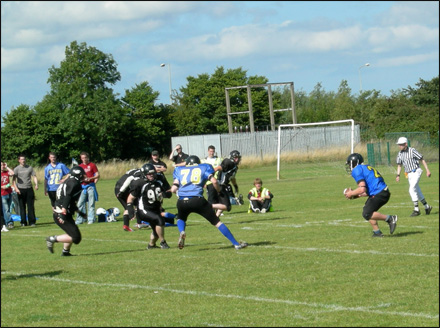 In 2007 the Irish American Football League began rapid expansion. For 2006 North Dublin Marshals and Dublin City University Saints were added, bringing the League up to 8 teams, the most since 1987. Dublin Rebels again won the Shamrock Bowl, defeating University of Limerick Vikings 44-12, in the first of UL’s run of seven Shamrock Bowl’s in a row,

the Marshals lasted only one season but the addition of The Tallaght Outlaws and Belfast Trojans in 2007 necessitated the creation of three divisions: North, Central and South, which were won by Belfast Bulls, Dublin Rebels and the Vikings. the University of Limerick won their first Shamrock Bowl, beating the Cor Admirals 22-14 in the showcase game.

The Belfast Bulls, DCU Saints and Tallaght Outlaws all disbanded after the 2008 season, and the Dublin Dragons dropped down to the DV8 Development League, in the first contraction in a long time. The Rhinos became the West Dublin Rhinos, and the IAFL became one single division again. Dublin Rebels won the League title, although the 2009 Shamrock Bowl was to elude them as the Vikings won 9-6 in the first Shamrock Bowl to go to overtime.

The next season, 2010, saw another big expansion, with Dublin Dragons and Craigavon Cowboys making the step back up to the IAFL from the DV8 League, and they were joined by Trinity College Dublin and University College Dublin. The three divisions were won by the Carrickfergus Knights, Dublin Rebels and UL Vikings, with the Shamrock Bowl being a math-up between the Rebels and Vikings for the third year in succession, and the fourth in five years. The Rebels won out 15-0.

The DCU Saints folded before the 2011 season, with the Central and South Divisions again won by the Rebels and Vikings, although the Carrickfergus Knights showed signs of returning to their glory days by winning the IAFL North. For the fourth year in succession the Rebels and Vikings met in the Shamrock Bowl, which was a again a nail-biting, close encounter, with the Rebels winning 14-13.

For 2012 there was a new look to the League, with just two divisions; North and South, after the addition of Tullamore Phoenix from the DV8 Development League. The North Division was won by the Belfast Trojans, and the Vikings edged the Rebels in a hotly-contested South. A new team was etched onto the name of the winners roll when the Belfast Trojans beat the University of Limerick Vikings 16-14 in Shamrock Bowl XVI.

Thanks to Tim Leadingham (Tallaght Outlaws)