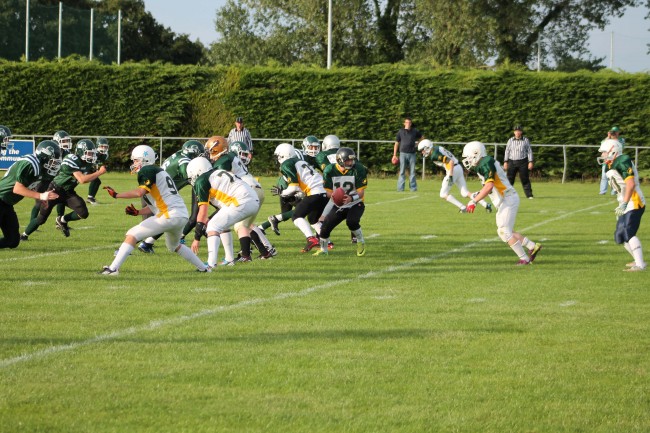 In 1991 an Irish All-Stars lost to the USAF Lakenheath Eagles, who were USAFE League champions at the time (USAFE was the United States Air Force in Europe Football League from 1947 to early 1990s). the Irish lost heavily, but managed to put a touchdown on the board – Quarterback Eddie Goggins connecting with Wide Receiver Dermot Connolly for a TD Pass. [Ref: 18-19]

The Dublin Tornadoes defeated a US Coastguard team, from the Rota Naval Base in Spain 7-0 in June 1993, and in 1998 another Dublin team, Dublin Tigers, lost to Maranatha Baptist, an American High School team.

In 2000, there was no Irish League and the only match played was the Ireland National Team versus Mount St. Joseph’s High School from Baltimore, Maryland. Ireland lost 36-12, but the match led to the rebirth of American Football in Ireland.

The University of Limerick Vikings also played a match against Philadelphia Blue Flame – losing 22-0 to a team of Firefighters and Policemen playing in the National Services League.

As part of the Global Ireland Football Tournament in 2012, in which over a dozen small Colleges & High Schools from North America played in various venues around Ireland, the Oak Park High School from Winnipeg Manitoba, beat Villanova College, from King City in Ontario 18-9, in front of 3,000 at Pairc Tailteann, in Navan Co. Meath.

The following year, as part of the Gathering Ireland celebrations in 2013, the Greendell Falcons, who play in the Winnipeg Major Football League played two games in Ireland – one against the Ireland U20s team, which they lost, and one against Bristol Academy Pride, who play in the European US High Schools League. Greendell won the latter 39-22 in front of 2,500 spectators at Tallaght Stadium. The Falcons Wide Receiver, Bryce LeBlanc was named MVP.

Thanks to Anton “Pippo” O’Grady.