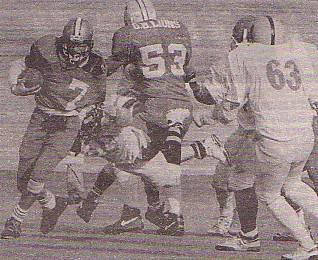 The Ireland Fighting Irish, playing in their first Full International went down 22-0 to the Great Britain Lions,  who scored on two passing plays to Mark Cohen & Joe Greenidge before sacking the Irish QB for a Safety.

The GB Lions added a run from Nigel Flemming to make it 22-0 at the end.

The 1995 Irish squad was chosen after trials in November 1995. Tragically, Irish CoachDave Curran, died only hours after the trials in Belfast and Dublin. Coach Curran had been Offensive Co-Ordinator for the Ireland team, and had previously been a coach for 25 years in America, and had been Head Coach of both the Dublin Celts and Dublin Tornadoes, both multiple Shamrock Bowl winners.

This was the first International Match without Coach Curran, and took place in Leicester, on St. Patrick’s Day, 17 March 1995.

If you find the Eirball Archive worth reading please make a once-off Donation of €5.00 (about $5.00) to help keep it up and running and on the web.