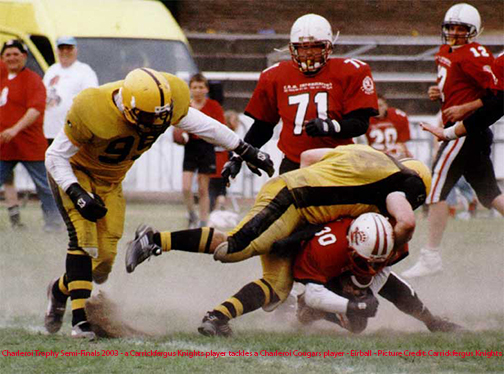 Celtes de Mitry 6 Dublin Rebels 8 – Dublin Rebels defeated Celtes de Mitry 8-6 in Charleroi Trophy Semi-Finals in 2003. The Rebels scored first through an Andy Flynn 1 yd run which was converted for two points by Marcus Naylor. Celtes de Mitry from France only started moving the ball in the second half, and managed to score a touchdown in the fourth quarter but the two point conversion failed and the Rebels hung on to reach the Final.

Celtes de Mitry 8 Carrickfergus Knights 22 – Carrickfergus Knights finished in 3rd place in the 2003 Charleroi Trophy thanks to a 22-8 victory over French side Celtes de Mitry. Paul McKillop opened the scoring for the Knights with a 75 yard Pass from Stephen McDowell in the first quarter. By halftime Carrickfergus were 15-0 up thanks to a 17 yayd Field Goal and a 13 yard touchdown reception for Gary Donnelly from Stephen McDowell in the second quarter. Celtes de Mitry hit back in the third quarter with a 16 yard run with a successful 2 point conversion bringing them within one converted touchdown of the Knights, but the men in black & gold from just outside Belfast clinched victory with a 14 yard reverse from Gary Donnelly to seal a 22-8 win.

Charleroi Cougars 0 Dublin Rebels 12 – Once again the Dublin Rebels got the better of the Charleroi Cougarson their own turf as they won the Charleroi Trophy for the second time in as many years. After a scoreless first quarter the Rebels opened scoring with 16 yard touchdown run from Sean Shanahan. Charleroi responded with a drive to the 8 yard line, but a run was stopped on the 1 yard line as time ran out in the first half. Charleroi had another scoring chance in the third quarter but were intercepted by the Rebels’ Marcus Naylor. Conor Ryan then scored in the final quarter from 15 yards out on an Andrew Dennehy pass which turned out to be the Final score of the match, as the Rebels finished 12-0 winners and a successful defense of the Charleroi Trophy.

Thanks to Lenka Mulligan (Brodekova) and John Kane & John Cummins.