Santos, with star attraction, Pele, went on a 10-game month-long tour of North America during June and July 1968. The tour started with three games against Italian side Napoli in New York and Toronto, attracting crowds of 43,000 at Yankee Stadium, home of Baseball’s New York Yankees, before moving on to play Midwestern teams St. Louis Stars and Kansas City Spurs, and then on to the West Coast where they played Mexican side Necaxa in Los Angeles, and then back to the East Coast to play Boston Beacons, winning all seven games before perhaps tiredness kicked in and the effects of so much travel, as they lost their next two games to Cleveland Stokers and New York Generals, before finishing up the trip with a win against Washington Whips.

The North American Soccer League had been established earlier that year, with the help of FIFA and the USSF, and was the first great attempt at bringing Professional Soccer to North America. The League lasted until 1983. Santos were one of the top sides in the World at the time, and rivaled unofficial World Club Champions, Racing Club of Argentina. They are based in the City of Santos in the Brazilian State of Sao Paulo.

Thanks to Martin Slattery.

Researched, Compiled and Written by Enda Mulcahy for the 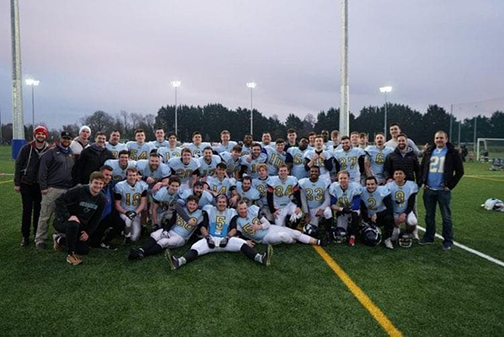 University of Limerick Vikings won the Colleges and Universities Sports Association of Ireland College Bowl from 2006 to 2009, defeating Dublin City University Saints each time. In 2010 two new forces came on the scene: Trinity College Dublin won the IAFA College Championship from 2010 to 2013, with University College Dublin winning from 2014 to 2019 (2015 and 2016 winners are unknown).

The Jordanstown Jaguars, based in Ulster University Jordanstown played in the first full season of the Irish American Football League in 1987. The Trinity Bowl, played from 1992-1995, was the first competition played in Irish Universities, although it did not involve College teams. The Irish Collegiate American Football Association was formed in 1993, and played a Flag Football Summer Bowl over the Summer Holidays, involving both College Students and non-College Students. From 1998 to 1999 the Queen’s University Belfast Broncos competed in the AFAI Irish Senior League, and in 1999 the University of Limerick Vikings were formed, initially as a Flag Football team, and then from 2001 onwards as a fully kitted team playing uin the resurrected IAFL.

The First Colleges and Universities Sports Association of Ireland (CUSAI) Kitted College Bowl was played in 2006, when there was more than one kitted College team for the first time, namely the University of Limerick Vikings and Dublin City University Saints. The College Championship became a three-team tournament involving the Trinity College Dublin Thunderbolts and the University College Dublin Sentinels in 2010 (DCU were no longer fielding a team). In 2014 the Irish American Football Association took over the running of the competition from CUSAI after the CUSAI became Student Sport Ireland and renamed the College Bowl the Intervarsity Championship.

Thanks to Cillian Smith of the Irish American Football Association 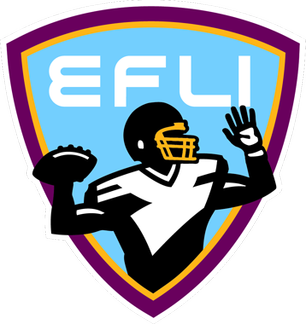 The Hoods Wolfpack won the first ever Elite Football League of India Banguluru Cup 7v7 American Tackle Football Championship in 2015, defeating Black Mambas 8-0 in the Final. Wolfpack’s Tejas Murthy was named Tournament MVP (Most Valuable Player). The Wolfpack had earlier finished second in Pool A by defeating Banguluru Kings but losing to Black Mamba on a tie-breaker in extra-time (Black Mamba gained more yards in extra-time). In the Semi-Finals they knocked out Pool B winners Black Tigers while Black Mambas defeated Bangaluru Bulls. The Tournament was a 7v7 Blitz-style Tournament and was the first time American Football was broadcast live on TV in India. 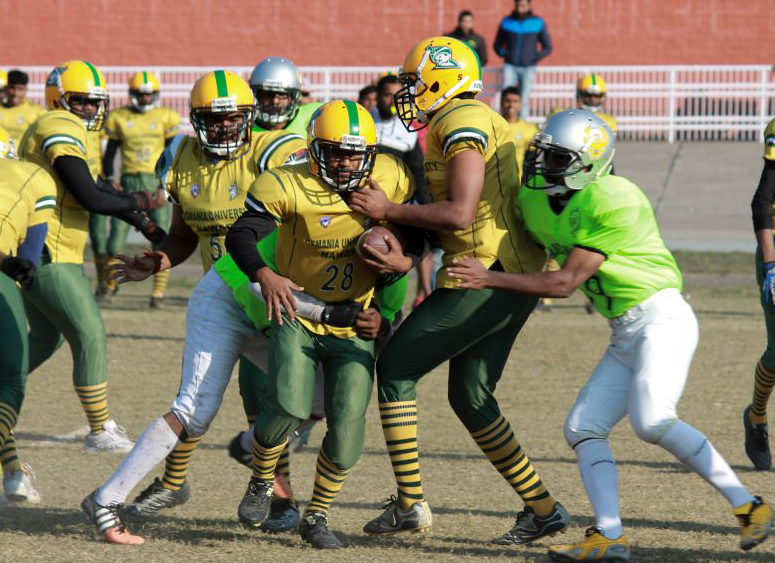 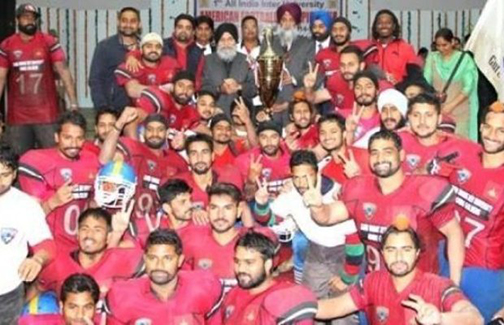 Ireland 27 England 7 – While it was billed as Ireland’s first ever International Flag Football match, this was not the case, however it was to be memorable nonetheless, with Quarterback Aidan Kelly putting in an impressive preformance to marshall Ireland to a 27-7 triumph. Ireland opened the scoring on their second drive in the First Half with a 25-yard run by Brian Dennehy. Steve Gleeson added the extra point to make it 7-0. England replied almost immediately with their Quarterback Martin Brown connecting with Lawrence Tallon (Fen Harriers) on their next play from scrimmage, who sprinted 70 yards to the endzone. Midway through the First Half Ireland retook the lead when Brian Dennehy added a 20-yard reception and run. Padraig Reddington caught a 10-yard Touchdown Pass from Aiden Kelly and also addec the extra point to put Ireland 20-7 up at halftime.

England pressed hard after the break but failed on numerous occasions to convert possession deep in the Irish half to scores, with Stephen Dunne pull in two interceptions and Al Burke and Padraig Reddington combining for three sacks. Ireland took control of the game late in the Second Half, following Liam Farrell’s 20-yard Touchdown in the dying minutes, to make the final score 27-7. Ireland’s Coach Ian McGuinness was pleased with the win considering it was Ireland’s first ever match (since the Irish American Football Association was resurrected). The match was to become an annual affair with Ireland travelling to England for a return fixture in 2001.

You may quote this document in whole or part provided that proper acknowledgement is given to the authors. All Rights Reserved.

Karen Dunne of Bohermeen AC won the Athletics Ireland Senior Women Heptathlon in 2020 with a score of 4095. The Senior Men’s Decathlon was won by Rolus Olusa of Clonliffe Harriers AC with a Total Score of 6400.

Thanks to Aoife Mulcahy and Aisling Delaney.

You may quote copy this document in part provided that proper acknowledgement is given to the authors. All Rights Resereved.

Thanks to Sean Patrick Fagan. 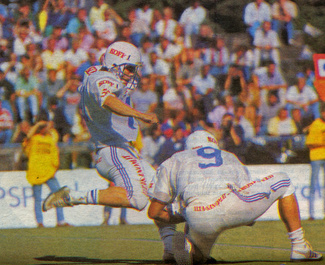 The first SAJL Finnish American Football Federation Maple Bowl was played in 1980 with Espoo Poli, from a small town on the outskirts og Helsinki defeating Helsinki MAJS 12-0. The next four Maple Bowls were won by Helsinki teams (MAJS in 1981, Roosters in 1982 and 1983 and East City Giants in 1984). Vantaa TAFT, another team from a small town on the outskirts of Helsinki, won the title in 1985, then the Helsinki Roosters won three-in-a-row from 1986 to 1989. Munkka Colts, a suburb of Helsinki won the 10th Maple Bowl 3-0 with just a Field Goal.

Thanks to Niall Howard.

Season Report: On the 6 July 2002, the Drimnagh Cycos hosted the Leicester Europa Eagles, many times British Senior Flag League Champions in the Annual Anglo-Irish Flag Football Challenge in Sallins GAA Club, Co. Kildare. The match finished a 12-12 tie. The following January the Cycos played a match against a BSFL Allstar team in the Phoenix Park, losing 12-18 (see match report below).

Drimnagh Cycos 12 BSFL Allstars 18 – The BSFL Allstars travelled to Dublin on a cold, wet windy day on Saturday, 25 January 2003 to play the Drimnagh Cycos in the Anglo-Irish Flag Football Challenge in the Phoenix Park. The BSFL Allstars were made up of players from the Bournemouth Raiders and Invicta (Canterbury) Coyotes. The match was 7v7 Flag Football under the Irish Rules then used in Ireland. The Cycos first possession was stopped at the 20-yard line by a strong BSFL Defensive stand. On the first BSFL possession QB Nick Michael threw the ball straight into the hands of the Cycos #55 (Liam Farrell), although again the Allstars defense stopped the Cycos from scoring. QB Michael yet again threw an interception on the next BSFL drive, this time in the endzone. Drimnagh Cycos Quarterback Aidan Kelly scored the first Touchdown of the game on the next possesion, running in from 5 yards. Stephen wigley of the BSFL Allstars helted the Point After with a lunging tackle. Michael threw a third interception on the next drive, this time to Cornerback #53 who returned it 30 yards for the second touchdown. Kelly was tagged on the resulting option play by Mark Houston, ening the PAT attempt, leaving the score 12-0 to Drimnagh. Mark houston replaced Nick Michael at Quarterback for the Allstars, and they drove downfield in the final two minutes of the half to put a score on the board as Abdulmalik Lawal caught a 10 yard TD Pass from Houston, although the PAT attempt was unsuccessful. The Half-Time Score read Drimnagh Cycos 12 BSFL Allstars 6.

The second half started with playmaker Mark Houston calling a no huddle offense with Michael as QB and Houston as Wide Receiver. While a couple of Cycos looked at Houston, none decided to cover him and Michael completed a 75-yard pass to Houston to tie the game. The PAT attempt to Stephen Wigley was spoiled by a Drimnagh defender. The BSFL defense dominated the Cycos from there to the final whistle, leaving little room on passing, running, option and trick plays, and both Vincent Gurrea and Stephen Wigley got interceptions for the Allstars. BSFL decide to run conservative rushing plays up the middle by Houston and the outside by Lawal, who broke free on a 40-yard running play to put the BSFL Allstars 18-12 up. After a controversial sack in the endzone where the teams dispured whether it should be a safety or not, the Cycos kept the ball on their own goalline. Three plays later Houston intercepted a Cyco pass and returned it 20 yards, but BSFL could not get in the endzone as the Irish team kept them out. The Cycos then took over and started slowly marching downfield, and after two unsuccessful attempts to get in the endzone they face 4th and Goal from the 10 yard line. QB Kelly rolled out to his right looking for Receivers #55 (Liam Farrell) and #53 but they were covered. Kelly circled back, looking for an open Tight End in the Endzone to his left, but just as he was about to release the ball, Lawal dove to take the flag, leaving the BSFL Allstars 18-12 winners.

You may quote this document in whole or part provided that proper acknowledgement is given to the authors. All Rights Reserved.